Old Blewett Highway is a great break from the urban streets that I am accustomed to riding around Seattle. It has almost no traffic, beautiful scenery and offers a great nature fix. It’s roads like this that I enjoy bicycling.

Before the faster and modern Highway 97 was built in the 1960s, Old Blewett Highway twisted, turned and climbed over the mountains between Cle Elum and Leavenworth. Following old Indian trails, the route was first constructed as a wagon road in 1891 to benefit miners. In 1922, Sunset (cross-state) Highway was rerouted across Blewett Pass. This brought a restaurant, hotel and small ski hill to the pass. Today, the attractions are long gone but approximately 13 miles of the original road remains and is maintained by Okanogan-Wenatchee National Forest.

Leaving busy Highway 97 behind, we began the steady climb up to Old Blewett summit. We passed folks in the lower woods foraging for mushrooms. Upward we pedaled into the piney woods, listening to the chorus of songbirds and glimpsing peak-a-boo views of distant peaks and ridges. 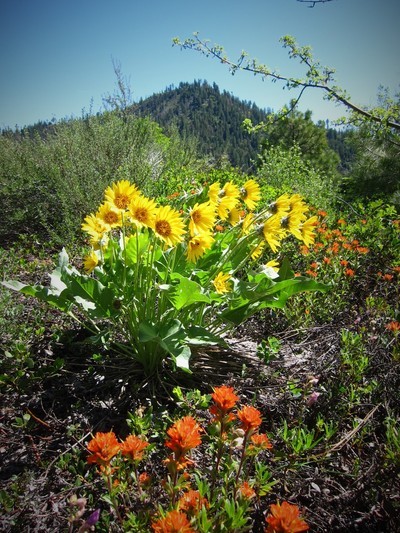 The wildflowers put on their own show as we climbed. Pentstemon, paintbrush, and balsamroot–oh my! The colors were vivid and the fragrance divine.

The road makes a serpentine ascent, practically folding back onto itself in tight hairpin turns at times. It eventually tops out at over 4000 feet before making a twisting descent back down to Highway 97.

It was interesting to note private interests in the area. There were homes tucked into the trees at Old Blewett summit and private mining claims still exist in the area.

Ready to create your own cycling adventure on Old Blewett Highway? Carry snacks and sufficient water, as there are no services on this road. Be alert to road conditions.  The pavement is narrow, sandy and gravelly in spots, and regularly experiences downed trees and falling rocks. Bring a camera or smart phone to capture your own ooh-aah moments.