Many folks retreat to the indoors when it is raining. I decided to embrace the wetness on this rainy day and head outside for some urban exploration. My destination: Pioneer Square.

Seattle’s oldest neighborhood, Pioneer Square is rich in history, culture and quirky haunts. A Tlingit totem pole, a waterfall and the Klondike Gold Rush National Historic Park are an easy walk of each other. Art galleries and restaurants share the neighborhood with high tech start ups and homeless shelters.

I like Pioneer Square because of its people-friendly design and public spaces. Streets tend to be narrow so traffic moves slowly, making it perfect for pedestrians and bicyclists. Parks and public squares invite you to sit, linger, and engage with the neighborhood.

Since it’s a drippy day, I don’t spend much time sitting. Instead I explore this oldest part of Seattle by wandering its streets and alleys. The Pioneer Square community believes alleys are more than a place to stash trash. They promote alleys as people space.

The Alley Network Project helped Pioneer Square citizens and businesses activate the alleys as people space. Boarded up doors and windows were opened up and used again. Plant baskets, artwork and lights were installed. Instead of dark, creepy passageways to be avoided, the alleys were inviting people to use them.

So I explored them. I walked through an alley delighted to see an open doorway, hanging plants, and bikes. More importantly, I wasn’t the only person using the alley. On this wet day, as I photographed the alley environment as it was reflected in a puddle, I captured this mystery woman in a beautiful red coat as she dashed by. 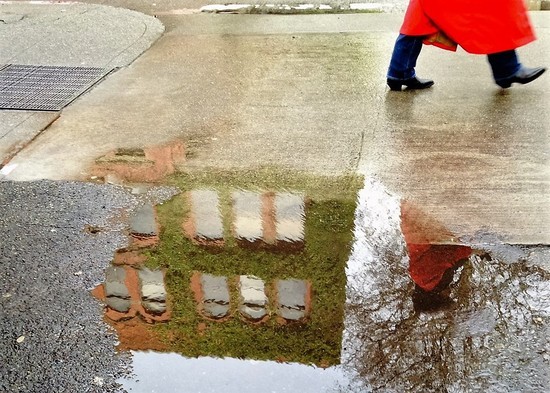 What are the alleys in your community like? Are they active spaces that welcome people?